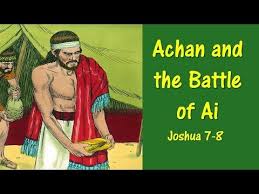 Following the victory at Jericho, Joshua sent spies to Ai.  They returned with a report that Ai was smaller than Jericho and only two or three thousand men would be necessary to take the town.

When the Israelites attacked Ai they were chased and defeated with the loss of about thirty-six lives.  Joshua and the elders were devastated and he asked God why.  “Israel has sinned,” God said.  “Sacred objects have been taken and put with their own possessions.  I will not be with you any more until this is corrected.”

The next day, tribe by tribe appeared before Joshua; then the clan within the tribe that God identified; and finally down to the family, until it was determined that Achan was the guilty person.  Achan, his family and all their possessions were destroyed.  Then God turned from His anger.  [Reflection based on the Bible Reference – Joshua 7:4-26]