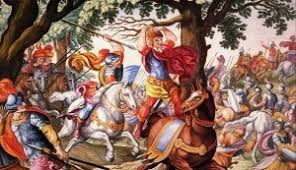 David’s men were ready to defend themselves.  They were organized into three battle groups with specific instructions to go lightly with Absalom. They met Absalom’s army in the forest of Ephraim.  God was with David’s men and they routed Absalom’s army.  The casualties were great…twenty thousand men.  Absalom met David’s men; and as his mule passed under a tree his hair got caught on a branch.  He was hanging from the branch and his mule kept going, leaving Absalom hanging in mid-air.  Joab and his armor-bearers surrounded Absalom, struck and killed him.  [Reflection based on the Bible Reference – 2 Samuel 18:1-15]