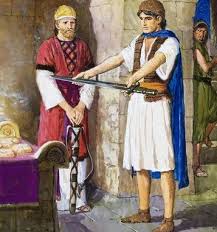 Alone, and with a death sentence hanging over his head, David fled to the city of Nob, where the Tabernacle and priests were located.  When the priest, Ahimelek, questioned him about his presence, David’s faith faltered and he told the priest that he was on a secret mission from the king.  Later, he regretted his action, because many people lost their lives when the king retaliated.  [Reflection based on the Bible Reference – 1 Samuel 21:1-2]