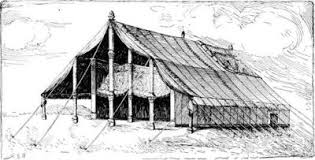 For a long time David experienced unrest, mostly at the hands of Saul; even though he spent time in Saul’s presence, making music to soothe his troubled spirit.  And as commander of Saul’s troops he defended the Israelites against invading enemies.  And living like a fugitive, on the run from the wrath of Saul, due to his jealousy of David’s successes.

Through all these experiences, David was obedient to God and he was aware that God protected him.  Now, God enabled the Israelites to conquer Jerusalem, David was provided with a palace in which to live in, and the land of Israel was at rest; but…David looked out the window of his palace and he saw the Ark of God in a tent.  This didn’t seem right, to David; so he wanted to build a temple for the Ark.  But, God said, “No,” it would be his son, Solomon that would build the temple. [Reflection based on the Bible Reference – 2 Samuel 7:1-17]