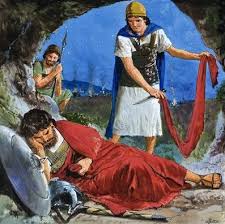 Saul had an irresistible desire to eliminate David.  After he quelled the Philistine raids into his territory, he received word that David was in the Desert of En Gedi, a mountainous region along the Dead Sea, which had numerous caves.

David and his men were in the back of one of the caves when Saul entered the cave.  Unaware of David’s presence, Saul was vulnerable to attack by David and his men.  David, however, refrained from harming Saul because David viewed Saul as anointed by God and that God would do as he pleased with Saul.

To let Saul know that he spared Saul’s life, David quietly approached Saul from behind and cut a piece of his robe.  Even this action troubled David’s conscience.  It was for God to determine how to deal with Saul.

As for Saul, when he became aware of how David had treated him, he said, “You have treated me well, I have treated you badly.  I know that you will surely be king and that the kingdom of Israel will be established in your hands.”  [Reflection based on the Bible Reference – 1 Samuel 24:1-22]