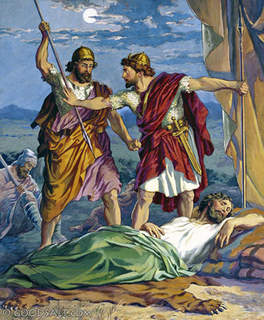 Again, the Ziphites went to Saul and told him they knew where David and his men were hiding.  Rather than honoring his pledge to David, Saul assembled his troops and off he went looking for David.

David’s scouts confirmed the location of Saul’s army and that night David and one of his commanders went to their camp.  God cause a deep sleep to come over Saul and his men.  With Saul fast asleep, on the ground, in the middle of the camp, with his spear stuck in the ground next to his head, David’s commander offered to end Saul’s life.  “No!” David said.  “The Lord himself will strike him, in His time.”

David took Saul’s spear and later confronted Saul, from a distance, asking, “What wrong am I guilty of?  The Lord delivered you into my hands, but I will not lay a hand on the Lord’s anointed.  Send one of your men here for the king’s spear.”  [Reflection based on the Bible Reference – 1 Samuel 26:1-25]