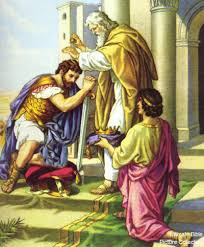 Following the death of Saul, David asked God where He wanted him and his men to go.  God directed him to go the Hebron.  When David and his men and their families and flocks arrived, the elders of Judah came and anointed David King of Judah.

Saul’s commander, Abner, had other ideas.  He arranged for Saul’s son, Ish-Bosheth, to be king of Israel, other than the region of Judah.  Joab, David’s commander and Abner viewed each other as adversaries and their actions reflected their attitudes.  [Reflection based on the Bible Reference – 2 Samuel 2:1-10]