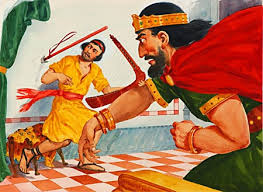 The Philistines attacked the Israelites and David with a military force defended Israel.  God enabled the Israelites to defeat the Philistines; but, this victory reminded King Saul of David’s popularity.  While David was playing the lyre for the king, again an evil spirit took control of Saul and he hurled a spear at David.  The spear stuck in the wall and David left the King’s residence and went to his own house.

This time, King Saul went beyond an impulsive attempt on David’s life.  He sent men to watch David’s house and kill him in the morning.  Michal, David’s wife, also, the daughter of King Saul, learned of the plot and enabled David to escape through a window.  In order to gain more time for David’s escape, she placed an object in the bed and when the men entered the house, she said David was ill.  Not to be deterred, King Saul ordered the bed with David in it to be brought to him so he could kill David.  Then it was discovered that the object in the bed was not David.  Meanwhile, David was on his way to visit Samuel to seek his advice on what to do.  [Reflection based on the Bible Reference – 1 Samuel 19:8-18]