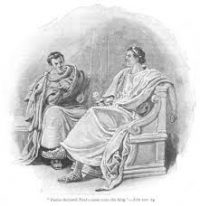 Festus found himself in an awkward situation.  He had been assigned the governorship of areas including Judea.  Early on, the Jewish leaders let Festus know that if he wanted their support, they should hand Paul over to them.  He provided an opportunity for Paul to agree to have his case resolved in Jerusalem; but Paul repeated that he was a Roman citizen and wanted his case resolved in the Roman court system.  He appealed to Caesar.  In the conversation between Festus and King Agrippa, Festus admitted that he did not feel comfortable sending a prisoner to Caesar without an explanation of the charges against the prisoner. To the relief of Festus, King Agrippa volunteered to hear the case.  [Reflection is based on the Bible Reference – Acts 25:13-22]