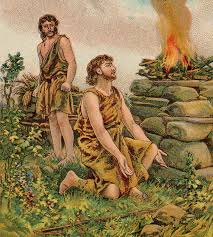 The first child born to Adam and Eve was Cain, followed by his younger brother Abel.   Eve’s joy about the growing family would be short-lived.  As the boys grew older, Cain worked with the soil, producing fruit and vegetables, while Abel cared for the animals.

Cain and Abel brought an offering to the Lord, each from the work of their hands.  God looked at the heart of each presenter and found a lack of genuine faith in Cain.   Consequently, Cain became aware of God’s disapproval.  Cain allowed his spirit to be consumed with anger.  God warned Cain that sin wanted to claim his soul; and that he should do what was right.

Rather than asking God for forgiveness and establishing a right relationship, Cain chose to lure his brother Abel out into the field so he could murder him.  Sin caused a series of tragedies in the first family.  [Reflection is based on the Bible Reference – Genesis 4:1-12]