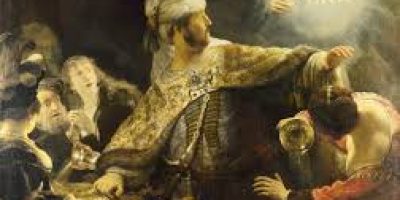 What was Belshazzar thinking as he looked around the room?  He was surrounded by a thousand people, all of whom thought they were important.  After all, they were invited to this party by the most powerful man in Babylon…Belshazzar.  Some even called him king.  Belshazzar liked the feeling of importance and he wanted to impress his guests; so he ordered that the golden goblets that Nebuchadnezzar had taken from the temple in Jerusalem be brought out and used to heighten the merrymaking.  The guests complied by worshipping the gods of gold and anything else that came to mind, except God in Heaven.  [Reflection is based on the Bible Reference – Daniel 5:1-4]