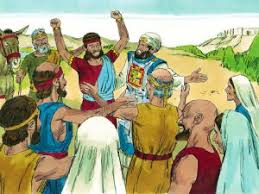 When it became apparent that King David’s health was poor and it appeared that he had a limited amount of time to live, his son Adonijah decided, without God’s direction, that he would take the position of king.  He held a feast and invited the royal officials of Judah and David’s sons (excluding Solomon).  Not on the list of invitees was Solomon, Nathan the prophet, Zadok the priest and David’s personal guards.  [Reflection based on the Bible Reference – 1 Kings 1:5-10]