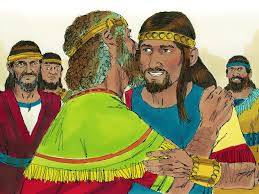 Absalom deceptively said to his father, King David that he had made a vow to God, when he was in Hebron, that if he was able to return to Jerusalem he would serve the Lord.  He asked for his father’s approval for him to return to Hebron to honor that vow.

Away from the presence of his father, Absalom sent representatives to each of the tribes assuring them that his kingdom would be established.  About ready to put his plan into action, he sent for Ahithophel, one of his father’s wisest counselors.  Meanwhile, Absalom’s popularity grew continuously.  [Reflection based on the Bible Reference – 2 Samuel 15:7-12]