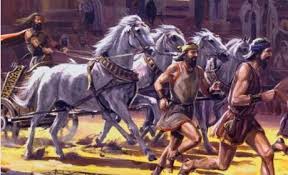 Tired of being ignored, Absalom sent for Joab, twice, with no response.  He instructed his servants to set Joab’s field on fire.  That should get Joab’s attention, he thought.  All of this because he wanted to see his father, King David.  When they met, David made no mention of Absalom murdering his step-brother.  What went through Absalom’s mind?  Was his father becoming weak?  No longer interested in being king?

Well, Absalom knew someone who would like to be king…himself.  And he had a plan…He got some chariots and horses and hired fifty men to run before him, like the king.  Next he took a position near the gates to the city and told anybody that would listen how much better they would be if he were the judge.  In the process he stole the hearts of the people.  [Reflection based on the Bible Reference – 2 Samuel 14:28-15:6]