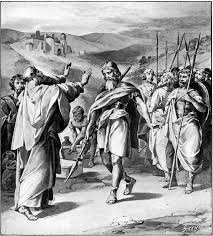 Abraham’s victory over the fighting men that captured his nephew Lot and the citizens of Sodom along with their possessions was recognized by the priest Melchizedek and Abraham as a victory made possible by God.

Melchizedek praised God for making the defeat of the enemy possible.  Then, Abraham gave a tenth of the possessions that were recovered, to Melchizedek.

The king of Sodom, who was attending this thanksgiving, said to Abraham, “All I want are my people, you may keep the possessions.”  Abraham informed the king that he had made a promise to God that he would not keep any of the recovered possessions.  He wanted it to be clear, in the future, that his wealth had been supplied by God. [Reflection based on the Bible Reference – Genesis 14:17-22]