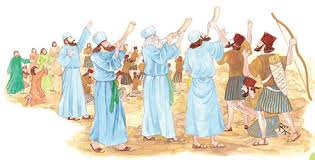 Abijah, son of Rehoboam, became king of Judah in 913 BC.  At this time there was a war between Judah (400,000 warriors) and Israel (800,000 warriors).  Abijah stood on Mount Zemaraim and addressed King Jeroboam, saying, “God is with us; He is our leader.  Do not fight against the Lord, the God of your ancestors, for you will not succeed.”

Jeroboam moved half of his warriors around behind Abijah’s force; so that he was both in front and behind Abijah.  Judah cried out to the Lord and He routed the army of Israel.  Israel suffered 500,000 casualties. [Reflection based on the Bible Reference – 2 Chronicles 14:1-18]