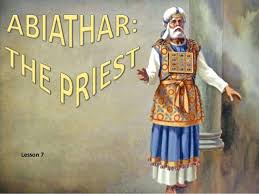 Abiathar, one of two high priests during the reign of King David was invited to a feast hosted by Adonijah, son of David.  Adonijah’s purpose for the feast was to announce that he was taking the position of king of the Israelites.  For some time, Adonijah had been travelling about in a chariot pulled by horses, with fifty men running in front of the chariot.  During this time, Abiathar had the opportunity to ask God for his direction for the next king.  It appears that Abiathar simply assumed that Adonijah was the likely candidate because he was the oldest living son of David.

Solomon understood that Abiathar’s priestly support for Adonijah had the effect of distracting the Israelites from dependence and obedience to God.  As a result Solomon removed Abiathar from the priesthood.  [Reflection based on the Bible Reference – 1 Kings 2:26-27]