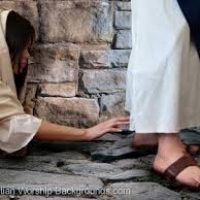 Twelve years she suffered. Doctor after doctor until all her money was gone; but, her condition continued to worsen.  Then she heard that Jesus had returned to the city and if she could get close enough to touch the hem of His garment, she was convinced that she would be healed.  Sure enough, as soon as she touched the His garment she could feel the healing power possess her body.  And Jesus was aware of what happened; but, He wanted the woman and the bystanders to understand what happened.  So He asked who “touched” Him.  When she admitted that it was her and how she felt the change in her body, Jesus told her and the bystanders that it was her faith in God’s ability to heal that made it possible.  [Reflection is based on the Bible Reference – Mark 5:25-34]