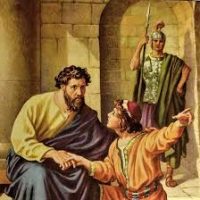 God had plans for Paul’s life; but a group of more than forty men decided that they would put an end to Paul’s life.  They were so serious about this that they pledged to each other that they would neither eat nor drink until they had killed Paul.  They went to the chief priests and elders and proposed a scheme that involved petitioning the Roman commander to bring Paul to the Sanhedrin for the purpose of further questioning.  They planned to ambush and kill Paul on his way to the Sanhedrin.  [Reflection is based on the Bible Reference – Acts 23:12-15]