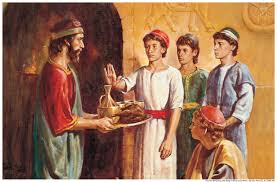 God delivered Daniel and others from Judah into the custody of King Nebuchadnezzar of Babylon.  In this new environment Daniel chose to continue his obedience to God through prayer and keeping God’s commandments.  Before long his relationship to God would be tested, because he was selected for an experimental program.  A court official explained to David and the others selected for the training program that they were being considered for positions in the court, to serve King Nebuchadnezzar.  In the instructions it was made it clear that the selection process and subsequent training would be a reflection on the official.  Then, he added, the candidates must appear handsome, intelligent, well-informed, fluent in the language…and healthy.

To assure that the candidates looked healthy, they would be provided a daily allotment of food from the king’s table.  But, Daniel didn’t know what the meat and wine would be, how they were processed, or if they were part of an offering to the Babylonian gods; and he wanted to avoid doing anything that would violate God’s commandments.  So, he asked the official for permission to be served vegetables and water.  “But”, the official said, “If you appear less healthy than the others, I will be in trouble with the king.”  “Please test us for ten days, and then compare us with those who ate the king’s food,” Daniel replied.  God caused the official to look favorably upon Daniel and he agreed to the test.  [Reflection is based on the Bible Reference – Daniel 1:1-16]