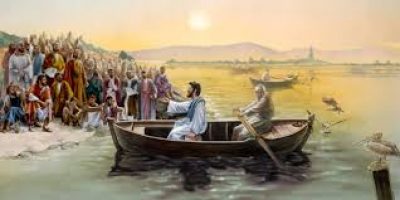 Word quickly spread about the man called Jesus that spoke of heavenly things with great authority.  In addition, He healed people of illnesses and cast out demons.  So attracted were the people, that crowds followed Him from place to place.  On this day, He was standing along the edge of the water of a fishing village near the Sea of Galilee.  A large crowd began to gather; and soon it was impossible for everyone to see and hear Him;  so, He got into one of the boats and asked the owner to move away from the shore a little; and from that position He taught the people from the boat.  [Reflection is based on the Bible Reference – Luke 5:1-3]